Have you seen your VNC Viewer showing a black screen intermittently ?  We have a fix for it. This issue has been occurring in our lab servers for a few students intermittently since the past few months on Oracle Linux server 6.5 release.

The VNC Viewer desktop background turns into a full black screen intermittently. It does not happen all the time and one of our students observed that this issue happens consistently when she  hovers her mouse on the VNC Config icon on the top left hand corner. This issue happens even if this icon is minimized. This observation is correct. 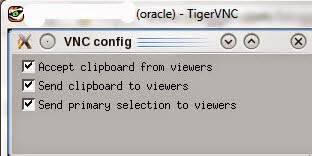 A workaround is to just close the above VNC config icon instead of minimizing it. But the permanent solution is to let the vncconfig deamon run in nowin mode (no window icon). Our vncserver service is owned by oracle operating system account.

a) Login to the server using a different protocol such as ssh on port 22.
b) cd /home/oracle/.vnc
b) Edit xstartup file and replace vncconfig -iconic & with vncconfig -nowin &
c) Now bounce the vncserver service using the below commands

The -nowin parameter will make the vncconfig functionality stay intact, but without the desktop icon. The actual cause of the problem could be due to an issue with the vnc-server RPM itself, specifically tigervnc-server-module 1.1.0-8.el6_5.x86_64.

Posted by DBA University at 12:14 AM No comments:

Learn SQL Language to work with Big Data in Hadoop

SQL (Structured Query Language) is the most widely used language to read and write data in relational databases such as Oracle, MS SQL Server and MySQL databases etc. SQL language existed since the 1970's and is also a standard of the American National Standards Institute (ANSI).

Apache Hadoop, which is the most popular framework for storing and processing Big Data, has a related sub project component called Apache Hive. Initially developed by Facebook Inc. and later open sourced, Apache Hive provides a data warehouse solution on top of Hadoop. It provides a relational database abstraction for Hadoop's Big Data (though Hadoop's databases are not relational databases). Of particular note is the HiveQL (SQL like language to query and analyze Hadoop's data) . If one already is an SQL language expert, learning HiveQL is very easy and helps a traditional (relational database) user work with most of Hadoop's Big Data easily.

Apache HCatalog extends  Hive (now since merged with Hive in 2013) by publishing a RESTful interface so that even external systems can access the Hive metadata using RESTful methods. Most of the popular distributions of Hadoop include the Hive component as well (now HCatalog) such as the HortonWorks Data Platform (HDP).  IBM's Hadoop distribution BigInsights has a similar component called as BigSQL.  Per IBM's blog, BigSQL is an enterprise-class SQL query engine and has better ANSI SQL support than HiveQL.

DBA University has a comprehensive Oracle SQL PL/SQL Training course and we encourage you to register for it if you don't have at least an intermediate level knowledge in SQL and PL/SQL.  It is a very detail oriented training course with remote lab server access for each student for practicing the SQL and PL/SQL lab exercises.